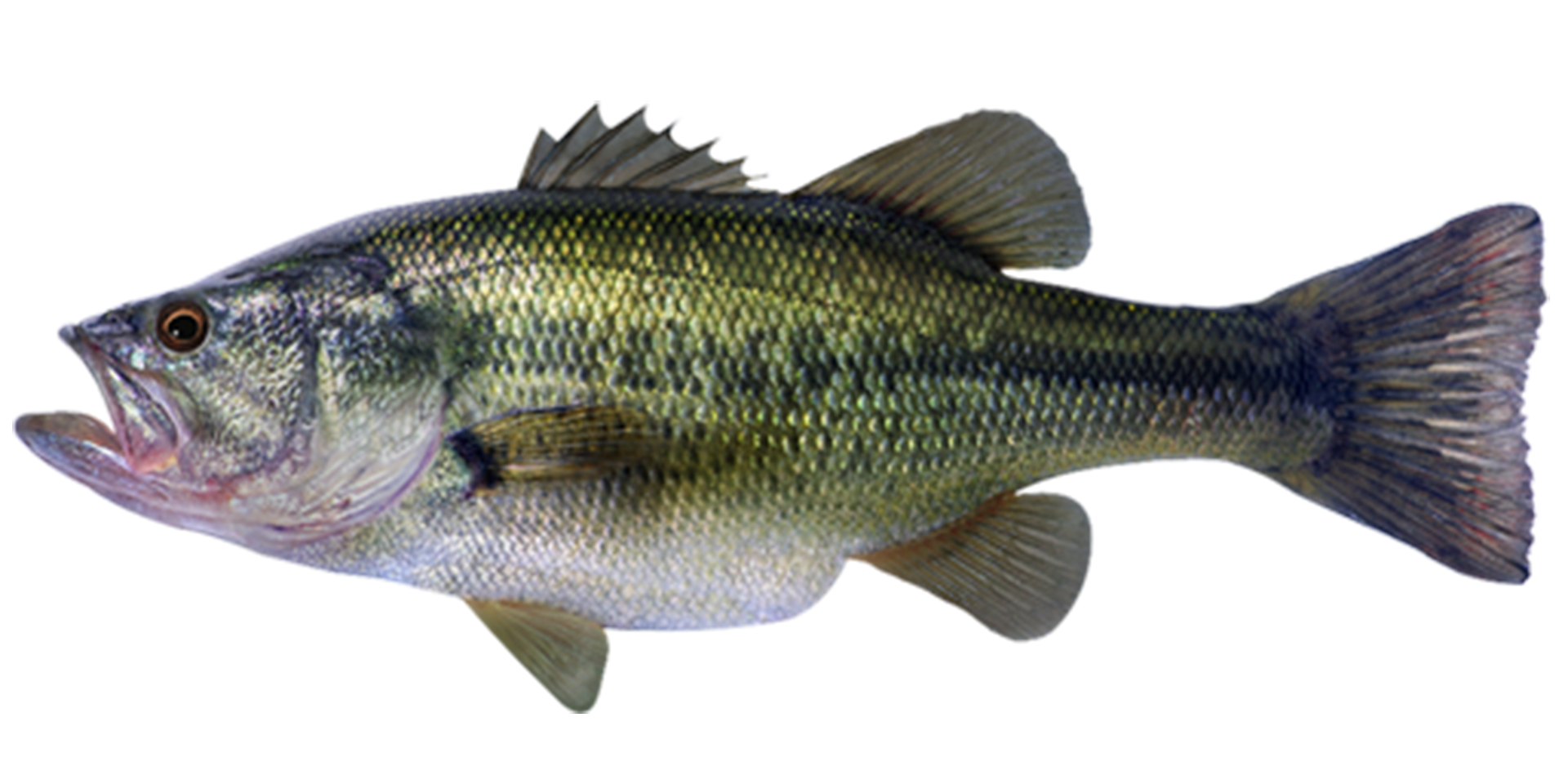 Yoke Lake
Slippery Winds is located in a sheltered bay at the east end of Yoke Lake. Yoke is the largest lake, approximately 6 miles long and 1,633 Acres in area. Yoke is clear with a mainly rocky bottom and sandy patches in shallow bays. Yoke has abundant structure with rocky points, narrow channels, islands, sandbars and fallen timber providing shelter for baitfish. Yoke has an east and west arm that connect the south area of the lake to shallow northern bays. The lake also has two larger open areas in the south with deeper holes where lakers congregate. Yoke Lake holds all six species of sportfish and is the only lake inhabited by muskie. Yoke has an exceptional walleye fishery, with the average-sized walleye caught and released by our guests in the mid-20-inch range. It is a challenge for our guests fishing Yoke Lake to catch walleye small enough to keep for shore lunch. Yoke Lake has produced muskie up to 54 inches, walleye over 30 inches, lake trout up to 38 inches, pike into the mid-40-inch range and both smallmouth and largemouth with sizes into the low 20 inch range.

Straw Lake
Slippery Winds “back dock” is located on Straw Lake. Straw Lake is just over 3-1/2 miles from end-to-end and 1,113 Acres in area. Straw is a shallow lake averaging 16 – 20 feet, with stained water and a softer muddy bottom. Shallow shorelines with pencil weeds, numerous cabbage weed beds, several islands, rocky points and sand bars provide shelter for baitfish and attract the sportfish that feed on them. Straw Lake offers anglers excellent opportunities to catch-and release walleye, largemouth & smallmouth bass, northern pike, and even has some quality yellow perch. There is a large population of northern pike with the average size ranging from the low 20’s to low 30-inch range, with the occasional pike up to 40 inches caught and released. Straw Lake is an excellent fishery for both largemouth and smallmouth with both species of bass averaging 16 to 18 inches and bass 20 to 21 inches not uncommon. Straw Lake also has a good population of walleye. The average size of walleye on Straw Lake is lower than Yoke Lake, averaging the mid-teens to low 20-inch range. Guests have also caught and released larger walleye, in the mid-20 to 29-inch range on Straw. Guests typically fish for their shorelunch walleye on Straw Lake.

Sucan Lake
Guests access Sucan Lake from Straw Lake via Sucan Creek. Sucan is shaped like a reversed “C”. Sucan is the smallest of our lakes, being approximately 2-1/2 miles from end to end and 458 Acres in area. The lake is fairly shallow, with dark water and a mix between rocky and shallow, weedy shorelines. The north end of the lake averages 10 – 15 feet deep and holds mainly smaller pike and walleye. A shallow sandy-bottomed narrows from 3 – 6 feet deep separates the north end of the lake from a deeper bay at the south end. This bay ranges from 15 – 35 ft deep and holds larger smallmouth bass and walleye. There is an excellent shore lunch spot located on the south side of a point located mid-lake that is a favourite with guests.

Crossroute Lake
Crossroute Lake is a perennial favourite among Slippery Winds’ guests. The lake is reached via a 425 yard portage from a bay at the north end of the western arm of Yoke Lake. Crossroute is a long, narrow lake, 720 Acres in area; 3.1 miles long with it’s widest section of 0.63 miles located two-thirds of the way up the lake. Crossroute averages approximately 30 feet and reaches depths of 70 feet in the south basin and 110 feet at the north end of the lake. The lake has excellent structure with numerous shallow bays, shorelines with abundant deadfalls of cedar, numerous cabbage weed beds, as well as islands, mid-lake reefs and rocky points., which offers protection for the baitfish and attracts the predator fish – pike and largemouth.

The largemouth angling on Crossroute is legendary with an average size of 16″ – 18″ and fish in the 18″ – 21″ range regularly caught and released. Daily catches of 100-plus largemouth are not uncommon. Crossroute also offers our guests excellent opportunities to catch and release trophy quality northern pike. There is a healthy pike population in Crossroute, with the pike averaging in the low to mid-30-inch range, but pike up to 45 inches are caught and released by our guests during most of our recent fishing seasons.

Being a clear, highly oxygenated lake, Crossroute also holds lake trout.The trout range in size from 6 – 14 lbs. In 2019 we received several reports from guests saying they had caught and released walleye in Crossroute Lake. The indicated sizes were in the low to mid-20-inch range, but the catches were few and far between.

Sullivan Lake
Sullivan Lake is accessed via a 300 yard portage located on the northwest shore of a bay at the north end of the eastern arm of Yoke Lake. Sullivan is 2.3 miles long and 1.3 miles wide at its widest point with an area of 982 Acres. Sullivan is a clear lake with an average depth of 30 feet with deeper areas in the south basin ranging from from 50 up to 110 feet.

Bluffpoint Lake
Bluffpoint is a long-narrow lake 4.2 miles long by 1 mile at its widest point with an area of 1,372 Acres. Bluffpoint is a clear, deep lake, reaching depths of 130 feet in the south basin, just north of the boat cache and up to 120 feet in the mid-lake and north end. Bluffpoint has a rocky shoreline and a sheer rock walled bluff adjacent to a deep channel. This is a favourite spot of Slippery Winds’ guests to troll deeper-running crankbaits for lake trout. It isn’t uncommon for double-headers with a laker caught on one side of the boat and a largemouth on the other side.

Bluffpoint has an exceptional largemouth fishery with 100+ fish days reported by our guests. The average size of largemouth on Bluffpoint is in the 16 – 18-inch range. Bob’s Bay, which is located on the west side at the north end of the lake is a favourite of many Slippery Winds guests. It takes quite a bit of work to get into Bob’s Bay, as you must portage your boat over a 4-foot-high beaver dam, but the effort is worth it as you can literally catch a 14″ – 16″ largemouth on every cast.

Bluffpoint has a good population of lake trout and is the most productive of all Slippery Winds’ Lakes for lakers with clear, highly oxygenated water and many areas of the lake in excess of 60 feet deep. The trout range in size from about 4 up to 14 pounds with the average trout being in the 6 – 10 pound class.

Northern pike also inhabit Bluffpoint’s clear water in good numbers. The pike range in size from mid-20 inches up to the low 30’s. It is common for guests fishing Bluffpoint to hit the “trifecta” – catching good numbers of pike, largemouth and lake trout on the same day.

With the variety of choices of both lakes and species available to Slippery Winds’ guests, it is almost guaranteed you will never become bored with the fishery. 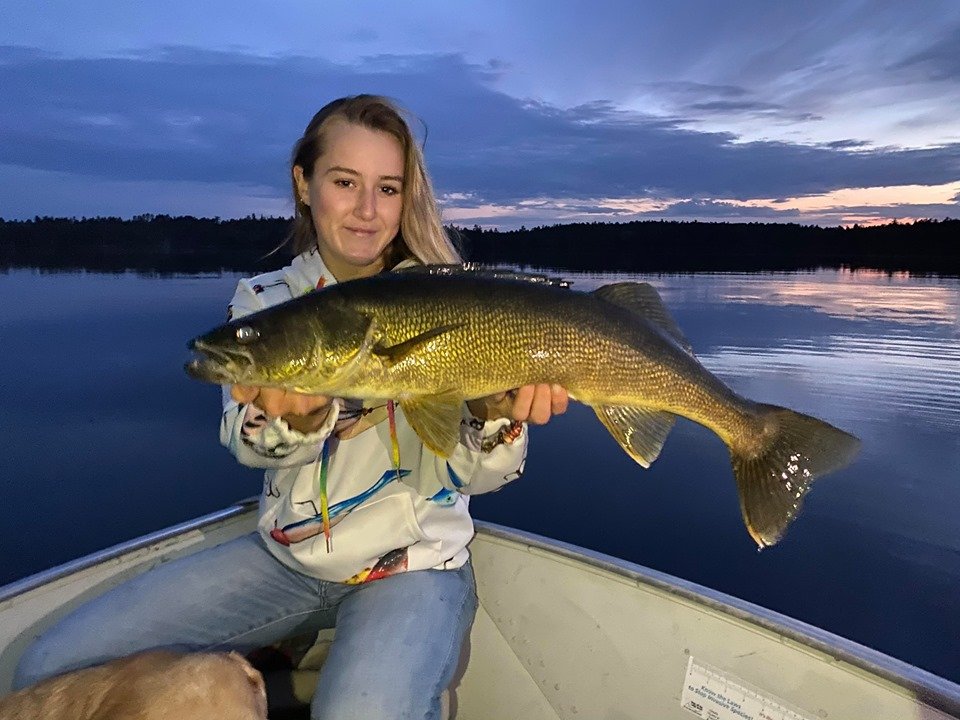 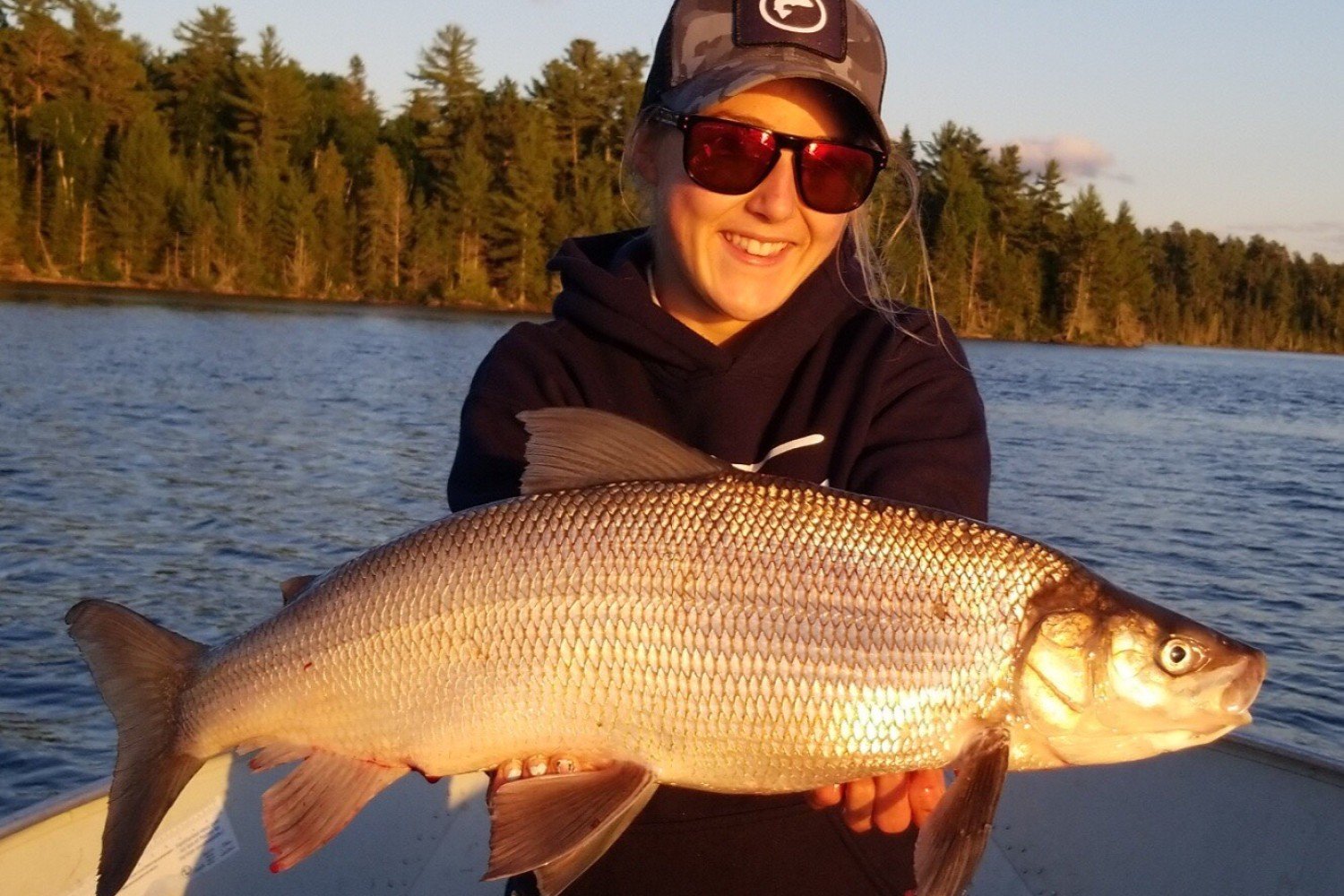 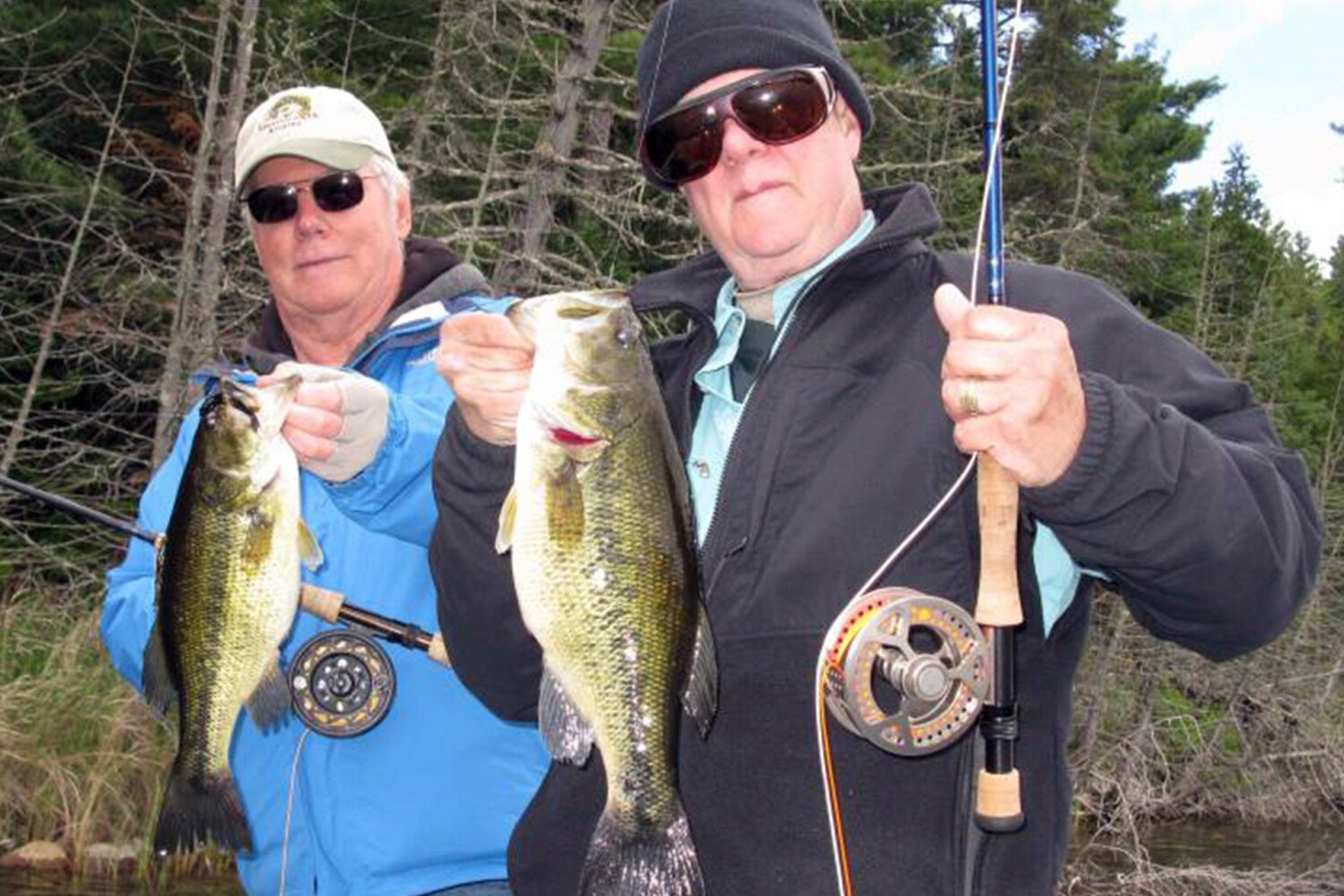 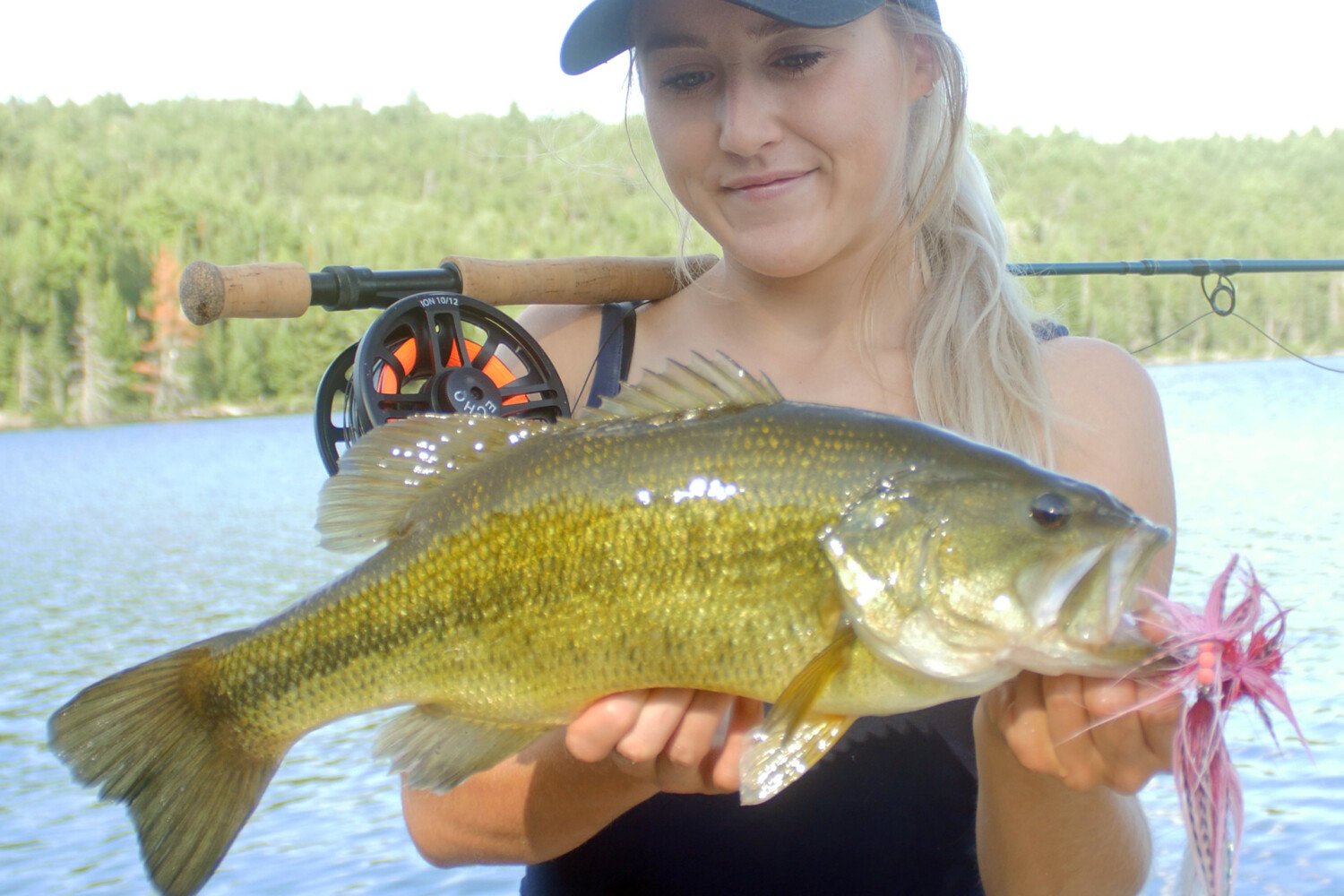 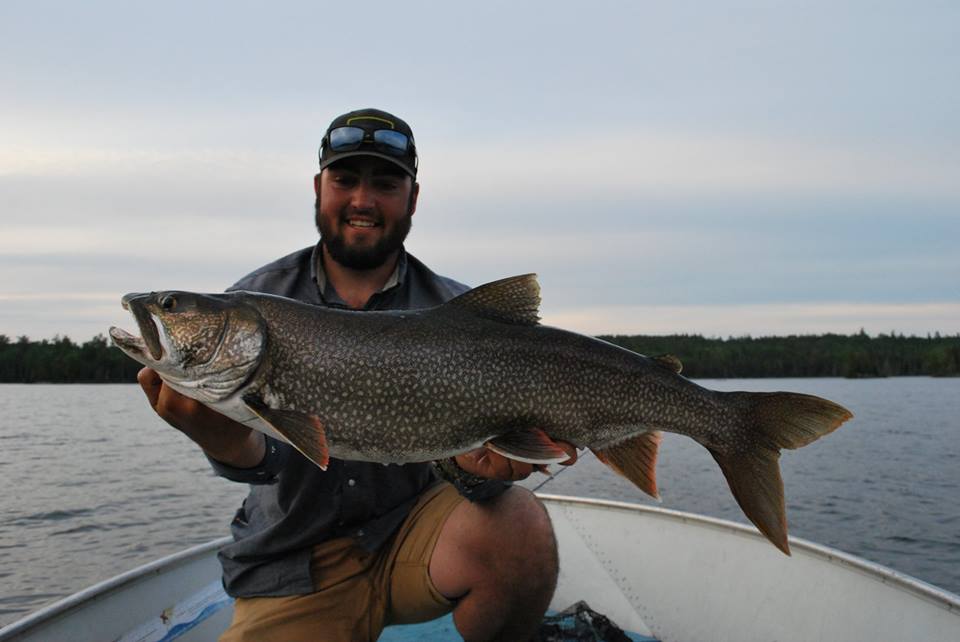 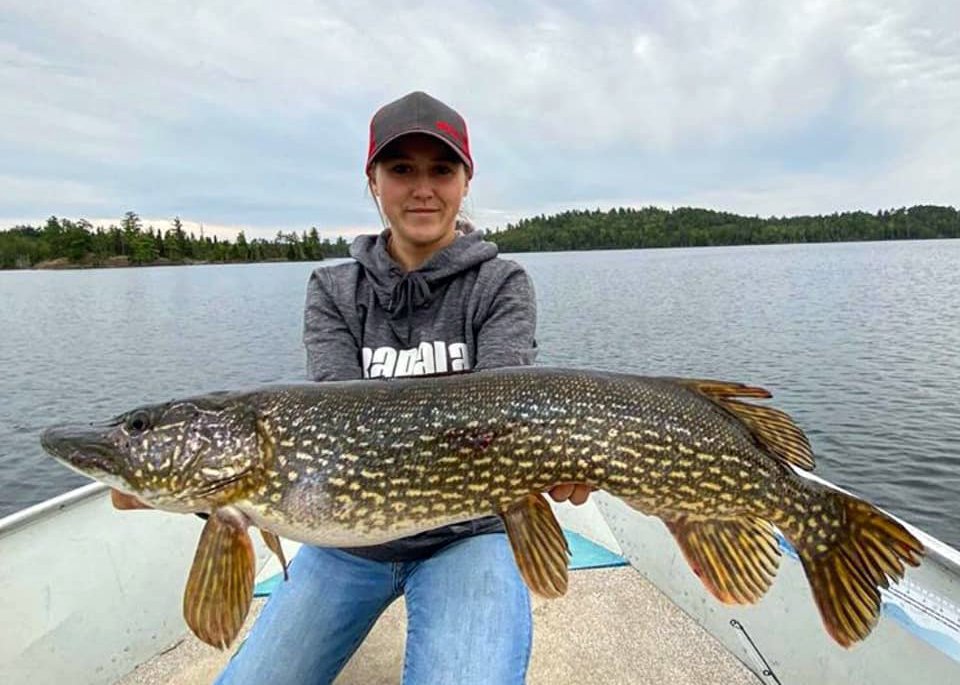 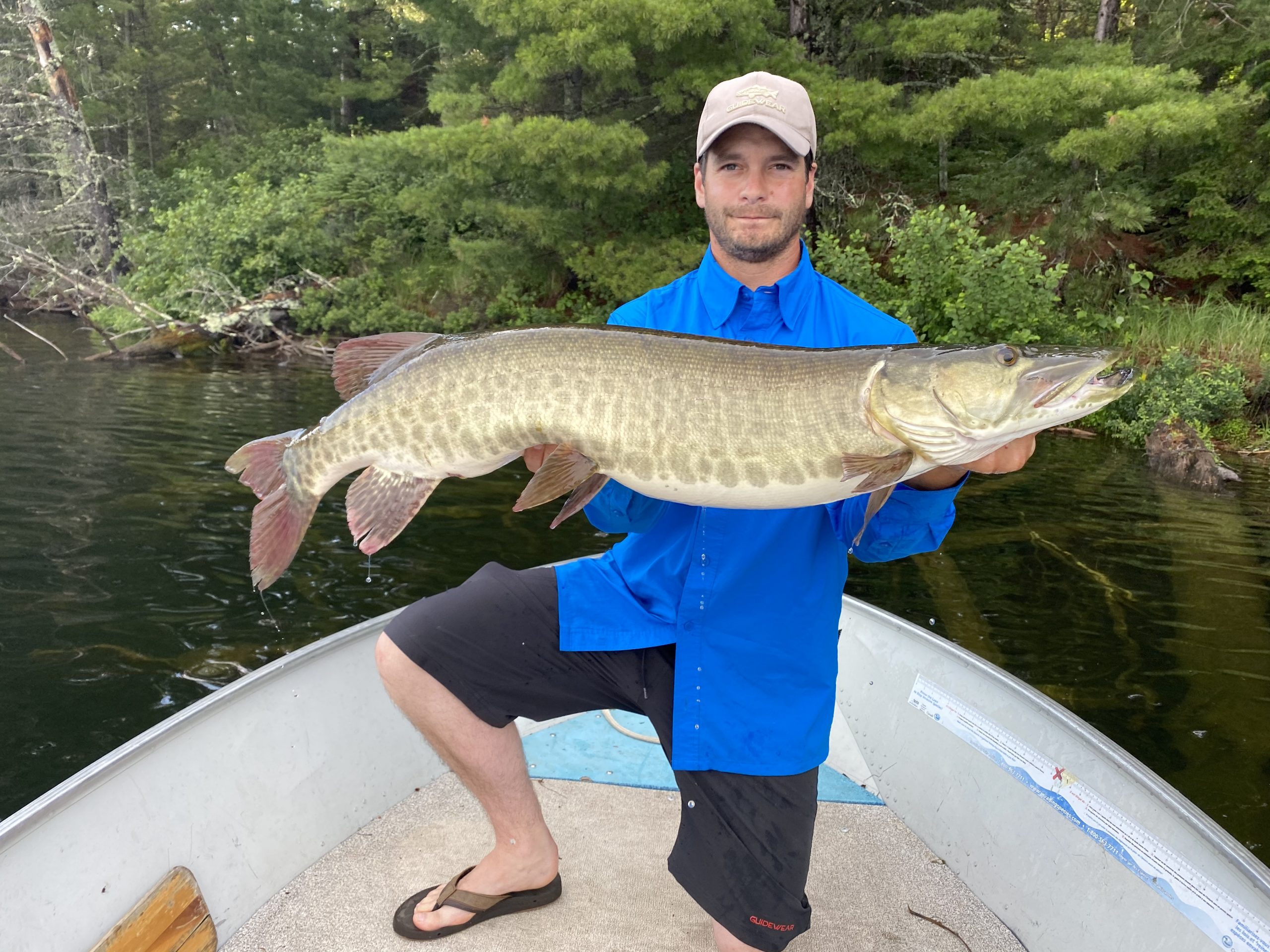 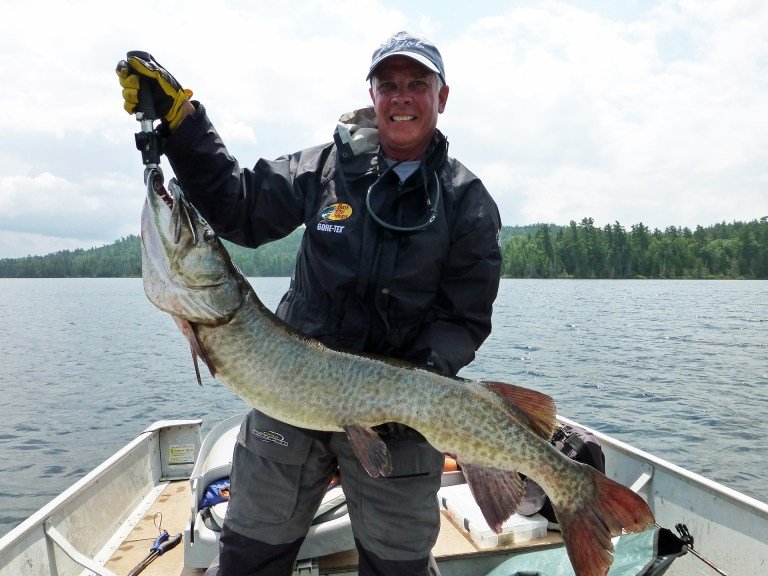 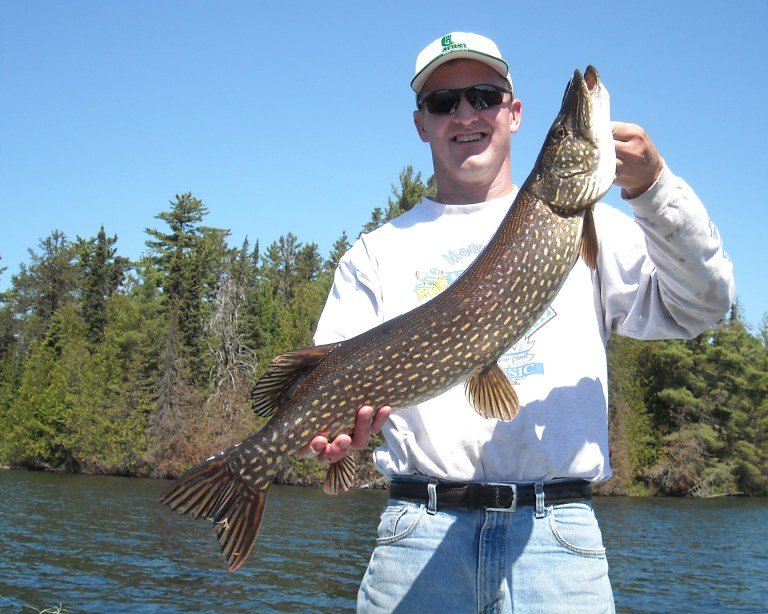 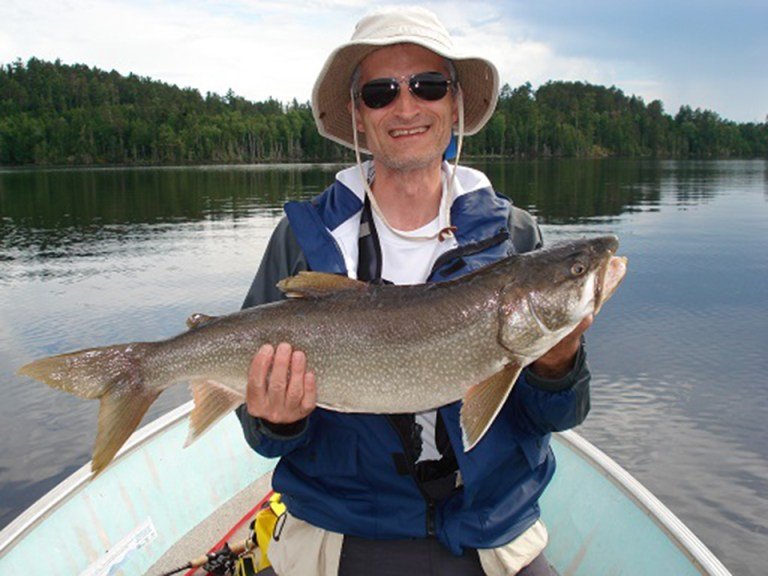 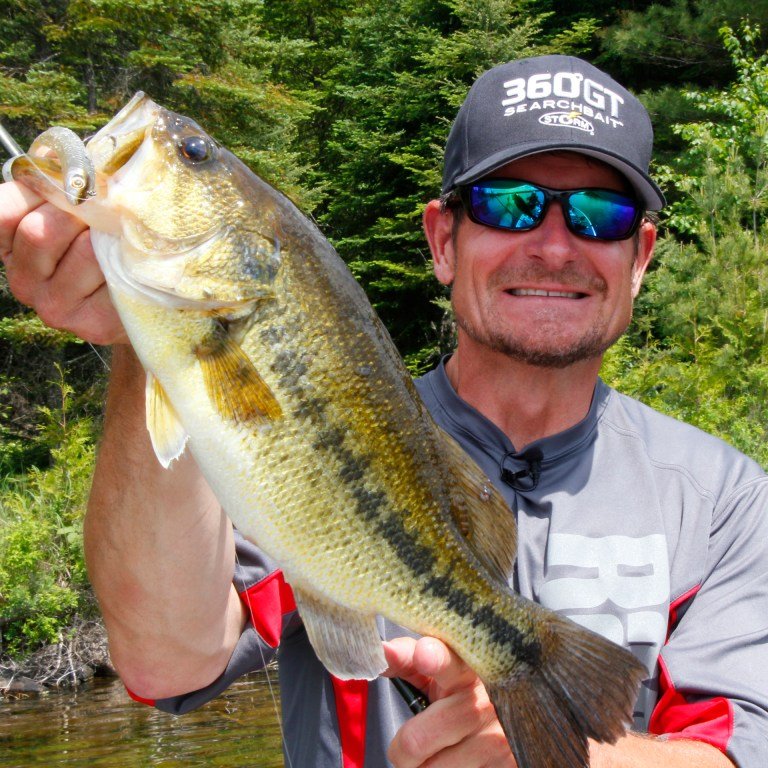 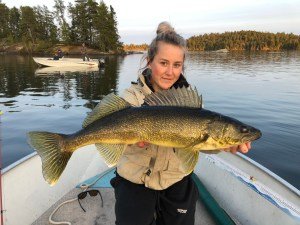 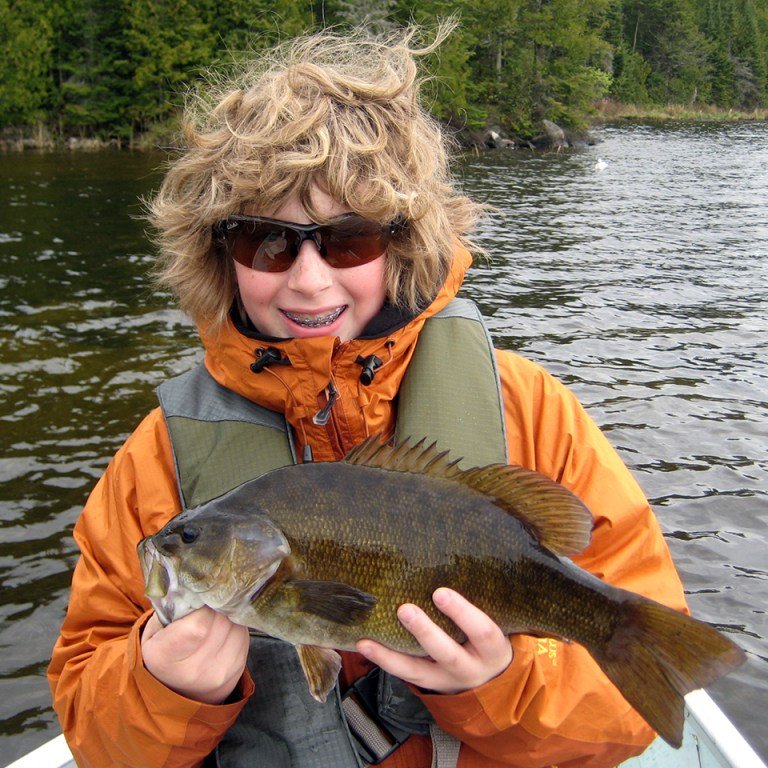